IT’S A TAX!  Today, in a 5-4 ruling, the SCOTUS upheld President Obama’s health care legislation.  Chief Justice John Roberts authored the majority opinion finding that Congress has the authority to require everyone to have healthcare.

The law is well over 2000 pages.  These are just a few changes in our healthcare system. How will it affect you?  For better? For worse?

At the May 22 production of “Revisiting Vincent,” one of our Community Presenters that were present at the event was POV, the documentary program on PBS.  They kindly took the time to edit together the video footage taken at New York Law School.  For those who were there, you can relive the power and impact of the performance and the engaging talkback that followed, led by Hon. Denny Chin and Dean Frank Wu.  For those who missed it, now is your chance to see what everyone has been talking about.  Thanks to POV for making this happen!

The Asian American Federation appreciates the significant investment of the Pew Research Center in producing a major report, The Rise of Asian Americans.  While we acknowledge the merits of this extensive report and its contribution to the public discourse on Asian Americans, we would like to express our disappointment and to point out the report’s serious shortcomings.

The portrait of Asian Americans as presented in the Pew report is glaringly incomplete and implicitly misleading.  The Asian American experiences are much more complex, diverse, and of contrasts than what the report presents.  Here are some cases in point:

·       Bangladeshi and Pakistani, two of the fastest growing Asian subgroups, as well as Cambodian and Hmong, who share similar immigration experiences as Vietnamese, do not fit the report’s portrait of Asian Americans.  Nationally, the poverty rates of these subgroups range from 15% for Pakistani to 26% for Hmong.  In New York City, two Asian subgroups have higher poverty rates than that of the overall city population of 19%: Bangladeshi (30%) and Pakistani (26%).

·       Both nationally and in New York City, there has been a growing concern about poverty among Asian American seniors.  Nationally, seniors of seven Asian subgroups experience significant poverty, and they are Korean (21%), Hmong (20%), Laotian (19%), Cambodian (19%), Chinese (17%), Vietnamese (16%), and Bangladeshi (16%).  In New York City, the Asian subgroups with seniors having higher poverty rates than that of the overall elderly population citywide were Korean (30%) and Chinese (30%).

·       According to recent studies of the Economic Policy Institute, despite having higher educational levels, Asian Americans had the highest share of unemployed workers who were out of work for more than half a year when compared with white, black and Hispanic workers during and after the Great Recession (2007 – 2011).  In addition, highly educated Asian Americans continued to have a higher overall unemployment rate than similarly educated whites.

·       The Pew report states that “for the most part, today’s Asian Americans do not feel the sting of racial discrimination or the burden of culturally imposed ‘otherness’ that was so much a part of the experience of their predecessors who came in the 19th and early 20th centuries”.  This statement is totally contrary to the well-documented racial profiling and discrimination that South Asian Americans, nationally and in New York City, have continued to feel and experience since the September 11th tragedy.  In general, Asian Americans have continued to experience bias and discrimination in different forms, from being called “chinks” to mockery on television, to bullying in school, and to hazing in the military.

Banana Republic in Soho has invited AABANY to the launch of the store’s new petite department this Thursday, June 28.  There will be music, refreshments, and complimentary Sephora makeovers. The event is open to the public, but BR is offering our members 25% off any full-price purchase of $100 or more (the petite line is women’s wear only, but men are also invited to participate and receive the discount).

Banana Republic Soho (550 Broadway between Spring/Prince)
Thursday, June 28 from 5:00-9:00 PM
To receive the discount, inform the greeter you are from AABANY

We are writing on behalf of the Asian American Pacific Islander Policy and Research Consortium (AAPIPRC), a national organization of four university-based Asian American research centers. [i]  We respectfully submit this response to the Pew Research Center’s recent report, The Rise of Asian Americans. Pew has assembled U.S. Census Bureau and government economic data, developing a detailed survey questionnaire, and conducting extensive telephone interviews with a national sample of 3,511 Asians. We acknowledge this is a major investment of Pew Research Center’s time and resources, and as a result has added to the publicly accessible information on the economic, social, and political situation of Asian Americans.

While there are merits to the Pew report, the selection of what information to present and highlight is highly biased, and the framing and interpretation of the analysis are incomplete and implicitly misleading and damaging for Asian American communities. We believe it is important to acknowledge the many accomplishments made by Asian Americans, but not at the expense of a fuller understanding of the diverse, complex and nuanced reality. The publication presents overly generalized descriptive and aggregate statistics, fails to critically explain the causes and limitations of observed outcomes, and falls short of examining tremendous and critical differences among Asian ethnic groups. We echo the comments by many Asian American scholars, advocates and lawmakers who point out how the study could lead policymakers, the media and the public to draw conclusions that reflect inaccurate stereotypes about Asian Americans being only a community with high levels of achievement and few challenges. There are many educational, economic, and health disparities, among others, facing our diverse communities. The selection of included populations leaves out some of the most distressed groups; consequently, the studied subjects are not representative.

As academic researchers, we understand the power and importance of quantitative analysis, but numbers are not just numbers, and they do not speak for themselves. They support a narrative through subjective decisions on topics, research design and methods, large frameworks to interpret results, and prioritizing which findings to highlight. We do not necessarily dispute the validity of many of Pew’s numbers, but we are deeply troubled by the emphasis that leaves the reader with a one-sided picture.  A primary example revolves around the claim that “Asian Americans are the highest-income,” an assertion that is the lead line in the press release and rests on median household income. Pew is accurate in reporting the most recently available numbers from the American Community Survey ($66,000 for Asian Americans and $54,000 for non-Hispanic whites), but fails to fully adjust for two critical factors: one, Asian Americans tend to have larger households, and two, they are heavily concentrated in high-cost metropolitan areas.

Because of a larger household size, income does not go as far in covering expenses. Analytically, per capita income is a more realistic measure. Nationally, Asian Americans on the average have 93 cents to every dollar for non-Hispanic whites. High-cost metropolitan area puts a strain on available income, and the economy partially adjusts for this through offsetting higher wages (compensating differential). Analytically, it is more accurate to compare statistics at the metropolitan level. Over half of Asian Americans (54%) live in the ten metropolitan areas with the highest number of Asian Americans.  In these areas, Asian Americans have 71 cents to every dollar for non-Hispanic whites. Clearly, the statistics on median household income and on adjusted per capita income portray Asian Americans very differently. Accounting for household size and location is very well known within the extensive literature on Asian Americans. While we realize that Pew acknowledges the potential role of household size and location, it nonetheless decided to spotlight unadjusted median household income. We believe that there are also other analytical flaws with the report because of Pew’s “spin”.

“Spinning” and selectively framing have serious implications. Pew examines race relations, and not surprisingly, the findings indicate inter-group tension. Unfortunately, the report does not adequately explain the factors and context that create the friction nor formulate effective solutions. Instead, it implicitly highlights the negatives. In examining perceived discrimination, the report does not integrate the research showing that Asian Americans are less likely to interpret, report and verbalize such acts, which can result in under-reporting. While the report sheds light on significant U.S. immigration trends and policies as they relate to Asians, it does so in a way that can adversely affect Asian-Latino relations. By highlighting the success of high achieving Asian immigrants, it shifts the immigration policy debates away from the concerns and contributions of Latino immigrants, especially the large numbers who are undocumented. This “model minority” framing can have a damaging impact on intergroup collaborations.

Again, we want to be balanced in our critique. We assume that Pew has made a useful contribution that brings much needed attention to the accomplishments of Asian Americans. At the same time, this has been counter balanced by the negatives. Our goal is to inform the public, decision makers and the media with accurate and well-rounded research that incorporates quantitative and qualitative methods, along with historical and humanistic accounts that give depth to the Asian American experience.

It is important, therefore, for Pew and other organizations to include researchers and analysts with greater knowledge of Asian American experiences. As you know, we are in the process of establishing an independent policy voice that more adequately represents Asian Americans. The Consortium is an initial effort to promote solid applied research. In this larger effort, we look forward to support and collaboration with Pew, along with other mainstream institutions.

We look forward to your response. Please send any correspondence to Professor Paul Ong (pmong@ucla.edu), who has agreed to coordinate AAPIPRC’s activities on this issue.

LeGaL, the Lesbian, Gay, Bisexual and Transgender Bar Association of Greater New York, held its 2012 Pride Celebration on June 22 at the Andaz Hotel.  The theme was “Honoring the Women of Marriage Equality,” to mark the one-year anniversary of the passage of landmark marriage equality legislation in New York.  Among the honorees was the Hon. Doris Ling-Cohan, Justice of the Supreme Court, New York County.  Judge Ling-Cohan authored the decision in Hernandez v. Robles (2005), making national headlines when she sided with the plaintiffs in their argument that the State of New York violated their constitutional rights by denying them marriage equality.  Although Judge Ling-Cohan was reversed on appeal, her position was ultimately vindicated when Governor Cuomo signed marriage equality into law in June 2011.  Congratulations to Judge Ling-Cohan on this distinction and honor!

Michael Yim, partner at Lee Anav Chung, has been appointed to the ABA’s Standing Committee on Lawyer Referral and Information Service. The Committee provides support and assistance to local public service lawyer referral programs that provide information on appropriate, quality legal services to the public. Michael was nominated by the National Asian Pacific American Bar Association where he also serves as co-chair of the solo and small firm committee.  Please join us in congratulating Michael as he undertakes this important role.

AABANY members, before you book your next court reporting assignment for depositions, consider using VERITEXT and take advantage of the discount now being offered until February 1, 2013, to all AABANY members.  Get more details by clicking on the link in the title.  VERITEXT will donate a portion of the proceeds to support AABANY, its mission and programs.  Thanks, VERITEXT! 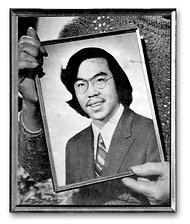 Thirty years after Mr. Chin’s death, hate crimes seem to be a remote threat for Asian-Americans. But it is premature, if tempting, to celebrate progress.

Frank H. Wu, chancellor and dean of the Hastings College of the Law, University of California, is the author of “Yellow: Race in America Beyond Black and White.” He is writing a book on the Vincent Chin case.