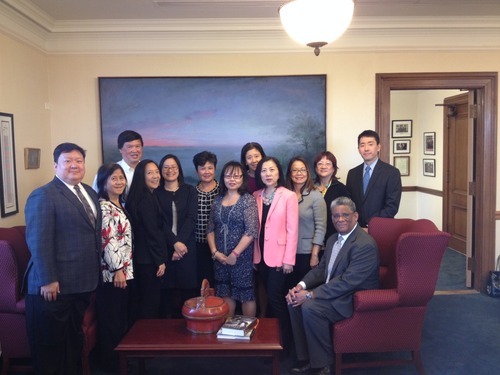 NEW YORK – April 25, 2014 – The Asian American Bar Association of New York (“AABANY”) announces its support of the Joint Statement on Comfort Women Issue regarding the City of Glendale, California’s approval of a public memorial commemorating the more than 200,000 Asian and Dutch women coerced into sexual slavery by the Imperial Armed Forces of Japan between 1932 and 1945.

The full text of the Joint Statement is as follows.

These women suffered unimaginable violence and brutality. Many have died; many near the end of their lives. It is important to remember what happened to them. They were victims, along with many others, of Japanese militarism and colonialism.

The suffering of these women, sometimes called “comfort women” after a Japanese euphemism for them, is a historical fact. As the U.S. House of Representatives said in H.R. 121: “[T]he Government of Japan, during its colonial and wartime occupation of Asia and the Pacific Islands from the 1930s through the duration of World War II, officially commissioned the acquisition of young women for the sole purpose of sexual servitude to its Imperial Armed Forces.” These women “suffered gang rape, forced abortions, humiliation, and sexual violence resulting in mutilation, death, or eventual suicide in one of the largest cases of human trafficking in the 20th century.” This resolution, which was adopted unanimously by the House of Representatives, was written and sponsored by Congressman Mike Honda of California.

We deplore the filing of a lawsuit in Federal district court that seeks the removal of the Comfort Women Monument. We are especially saddened by the representation of the plaintiffs in that lawsuit by Mayer Brown, a well-respected international law firm. The Complaint written by Mayer Brown lawyers refers to the comfort women as women “who were recruited, employed, and/or otherwise acted as sexual partners” of Japanese soldiers, without any acknowledgement of the violence committed against them. The Complaint goes on to argue that the actions of the Glendale City Council violate the United States Constitution. We cannot see how it could responsibly be argued that the approval of a memorial to the victims of wartime sex trafficking could be an unconstitutional act.

George Santayana noted that “those who cannot remember the past are condemned to repeat it.” We applaud the Glendale City Council’s act of remembrance. We hope that by facing historical truths we can avoid the tragic mistakes of the past and strive for a more just and humane world. Please contact Yule Kim of KABA-DC at ylkim30@gmail.com for more information.

NEW YORK, NY – Thursday, April 24, 2014 – The Asian American Bar Association of New York (“AABANY”) is pleased to announce its Executive Director, Yang Chen, will be receiving one of the Binghamton University Alumni Association’s Medals of Distinguished Service. A graduate of the Class of 1987, Yang Chen will be honored among many other esteemed alumni at the 2014 Special Recognition Award Ceremony on Saturday, April 26, 2014. Binghamton University presents these awards to recognize volunteerism at the University and excellence in professional endeavors.

Yang serves as a mentor and role model to countless young attorneys and Binghamton alumni by assisting in establishing network connections between Binghamton alumni and professionals in various fields, Yang has taken on the role of strengthening the bonds between our communities.

“AABANY is pleased to congratulate our Executive Director Yang Chen on this well-deserved recognition,” said AABANY President Clara Ohr. “From his work in AABANY and beyond, Yang dedicated himself to giving back to whatever community he touches, whether it be his alumni network, the Asian American legal community, or any of the other communities that AABANY serves. Yang’s path from private legal practice to non-profit service has made him a unique role model, so we applaud Binghamton University on their selection and congratulate Yang on joining an exemplary and inspiring group of Binghamton alumni.”

Add us on LinkedIn at www.linkedin.com/in/aabany/

NOTICE TO THE BAR

The United States District Court for the Southern District of New York is seeking candidates for its Criminal Justice Act (CJA) Mentoring Program. Ideal candidates are attorneys with five or more years of experience litigating in state court, with fifteen felony trials to verdict as lead counsel or comparable in-court experience under their belt. Under the supervision of a member of the CJA Panel, CJA Mentees would represent defendants in federal court who qualify for appointed representation under the Criminal Justice Act.

The purpose of the CJA Mentoring Program is to diversify the composition of the CJA Panel—a roster of private attorneys who are authorized to serve as appointed defense counsel pursuant to 18 U.S.C. § 3006A—and to expose experienced state court practitioners to federal practice. While the mentee’s initial 15 hours of service will be done pro bono, mentees may earn a reduced rate of $65 per hour for their services after the pro bono requirement has been fulfilled.

Candidate interviews will be conducted in early June. To apply for the program, please e-mail your resume by June 4 to:

“The CJA Mentoring Program offers attorneys a unique opportunity to expand their practice and learn from some of the top criminal defense attorneys in the nation,” said Chief Judge Loretta A. Preska. “The Court is fortunate to benefit from such an excellent program and grateful for the time and attention contributed by the mentor lawyers.”

Chief Judge Loretta A. Preska has announced that the United States District Court for the Southern District Court (SDNY) will hold a special session on Tuesday, November 4, 2014 to commemorate the first session of the Court held 225 years ago. President George Washington appointed James Duane, who had been a member of the Continental Congress and first mayor of New York City following the evacuation of British forces, as the Court’s first judge. Judge Duane held the first session on the first Tuesday of November, 1789, making it the first Court to convene under the new United States Constitution. For this reason, it is frequently referred to as the “Mother Court.”

The anniversary celebration will continue through 2015 with re-enactments of historic trials, lectures on some of the Court’s most notable jurists, and exhibits featuring art and historic artifacts such as the Silver Oar of the British Vice Admiralty Court for the Province of New York, the symbol of an admiralty court’s authority. A full calendar of events, under the co-chairmanship of District Judges Deborah A. Batts and P. Kevin Castel, will be published later this year.

Chief Judge Loretta A. Preska said of the anniversary commemoration:

“The history of this Court reflects the history of the nation. The Court has been the venue for civil war prize cases, litigation over the sinking of the Titanic and Lusitania, and the attack on the World Trade Center. It has seen criminal prosecutions from the Tea Pot Dome scandal to Watergate. Today its docket includes white collar and terrorism prosecutions. We are honored and delighted to mark this Court’s 225th year of continued service.”

Currently there are 28 active and 22 senior District Judges on the Southern District bench, in addition to 15 Magistrate Judges and 9 bankruptcy judges.

Volunteer Lawyers for the Arts (“VLA”) is looking for attorneys to provide pro bono services to artists and non-profit organizations. VLA serves low income and indigent artists and nonprofit arts and cultural organizations in every imaginable discipline. For example, theater, dance, fashion, the visual arts, performance, music, journalism, crafts, textiles, architecture, film, design, literature, and poetry are only a few of the artistic disciplines we service. Whether artists are looking to start a nonprofit dance company, copyright their manuscript or produce an independent film, VLA is available to assist them. If you are interested, please contact Josephina Tapia at jtapia@vlany.org.

Just in case you haven’t gotten your fill of photos from the AABANY 25th Anniversary Annual Dinner, here is a final set containing shots taken by Richard Kranzler. Enjoy! Thanks again to everyone who came, and thanks especially to our honorees and our sponsors.

Thank you to all those who came to AABANY’s Annual Dinner 2014 held on February 26 at Cipriani Wall Street!

In case you were wondering about additional photos from the event, here they are. Thanks to Karen Zhou for the great shots!

This year’s theme is Empowering Men to Speak Out Against Sexual Violence. To that end, OCDV is partnering with the Department of Youth and Community Development to provide an informative workshop on sexual violence at our Manhattan Family Justice Center for Manhattan Fatherhood Program participants. In addition, each of the Family Justice Centers are organizing activities to engage clients, their children, and partner staff.

I invite you to recognize Denim Day this year in one of the following ways: