NEW YORK – On Wednesday, February 26, 2014, the Asian American Bar Association of New York (“AABANY”) will hold its 25th Anniversary Annual Dinner at Cipriani Wall Street.  Attendees of the 2014 AABANY Annual Dinner will include prominent federal and state judges, elected officials and dignitaries, attorneys from large and small law firms, corporate law departments, prosecutors’ offices and government agencies.  AABANY’s 2013 Annual Dinner attracted more than 750 members of the legal and business communities from New York and beyond.  This year AABANY is pleased to announce that the 2014 honorees will be:

Vernon E. Jordan, Jr. will receive the AABANY I4 Leadership Award.  The I4 Leadership award is presented to a leader who is an ICON, embodying the highest IDEALS and INSPIRING others while making a real and lasting IMPACT in the community and society.  Mr. Jordan, a Senior Managing Director at Lazard, the financial advisory and asset management firm, also remains Senior Counsel at the law firm of Akin Gump Strauss Hauer & Feld LLP, where he practices general, corporate, legislative and international law in Washington, D.C.  Prior to joining Akin Gump in January 1982, Mr. Jordan served as president and chief executive officer of the National Urban League, Inc.; executive director of the United Negro College Fund, Inc.; director of the Voter Education Project of the Southern Regional Council; attorney-consultant at the U.S. Office of Economic Opportunity; assistant to the executive director of the Southern Regional Council; Georgia field director of the National Association for the Advancement of Colored People; and as an attorney in private practice in Arkansas and Georgia.  Upon graduation from Howard University School of Law in 1960, he joined the firm of a civil rights activist in Atlanta and became involved in a case against the University of Georgia to challenge racist policies.  In 1962, Mr. Jordan became a Georgia field director for the NAACP and his leadership was an instrumental part of the civil rights movement.  In particular, Mr. Jordan, as director of the Voter Education Project, coordinated voter registration drives and counseled the electorate, helping to dramatically increase the number of African-American elected officials.

”We are deeply honored and humbled that such a legendary defender of legal rights as Vernon Jordan will be helping AABANY commemorate our 25th anniversary at our Annual Dinner, along with Randal Milch, recipient of AABANY’s Corporate Counsel Leadership Award, and AALDEF, recipient of AABANY’s Public Advocacy Award,” said Mike Huang, AABANY President.

It’s time to lock in your sponsorship for AABANY’s 25th Anniversary Annual Dinner! The deadline has been extended to Feb. 7.

For those who wish to purchase Individual Tickets, February 7 is the extended early bird deadline.

Please see below a table of ticket prices for the Annual Dinner: 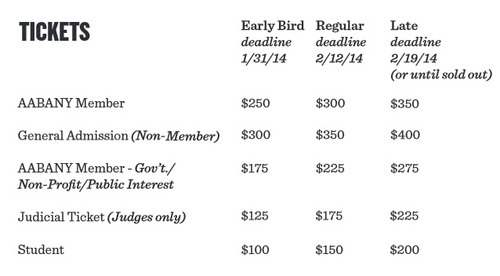 To secure a sponsorship or individual ticket, please click on our annual dinner link: http://bit.ly/aabany25.

We look forward to seeing you at this momentous event.