Helen Wan is a novelist, lawyer, and speaker. She was a special guest speaker at AABANY conference in 2014. Her novel, The Partner Track, is the story of a young woman of color competing for partnership at a powerful law firm. It’s about how race, sex, and class impact talented people on the corporate ladder. It’s about trying to pursue success and live authentically in the workplace while staying true to ourselves.

Museum of Chinese in America (MOCA) is hosting MISSION POSSIBLE: In Conversation with Helen Wan, next Tuesday, July 12th, 6:30 pm to 8:30 pm. This event features a conversation between MOCA President Nancy Yao Maasbach and Helen Wan, followed by a book signing.

For More MOCA events in this month, follow the link in the title!

To see more about our Fall Conference 2014: Empowering Unity and Progress, click here.

From Lawyer To Novelist: An Interview With Helen Wan, Author Of The Partner Track

How can you write a novel while holding down a demanding day job as a lawyer? How can women and minority lawyers position themselves for success in Biglaw? Author Helen Wan shares her insights.

We are pleased to announce that Helen Wan will be joining AABANY as a special guest speaker during the luncheon held at the 5th Annual Fall Conference, taking place at Morgan Lewis. We hope our attendees will take the opportunity to meet Helen and pick up a copy of her book, now out in paperback.

For Immediate Release:
On Sale: September 9 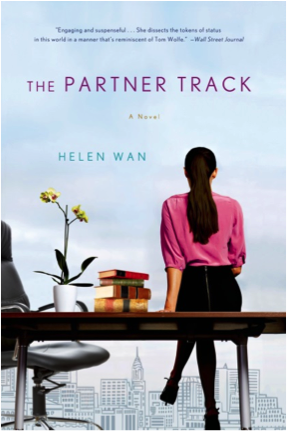 Last fall, Helen Wan took the world by storm with her debut novel, The Partner Track, a new take on the office politics/law firm novel that follows a Golden Girl employee who has passed the apprentice stage and is now facing mature and relatable issues. THE PARTNER TRACK (St. Martin’s Griffin; On-Sale September 9, 2014), now available in trade paperback, tackles the many controversies that women face in corporate settings.

In the eyes of her corporate law firm, Ingrid Yung is a “two-fer.” As a Chinese-American woman about to be ushered into the elite rank of partner, she’s the face of Parsons Valentine & Hunt LLP’s recruiting brochures–their treasured Golden Girl. But behind the firm’s welcoming façade lies the scotch-sipping, cigar-smoking, old-boy network that shuts out lawyers like Ingrid. To compensate, Ingrid gamely plays in the softball league, schmoozes in the corporate cafeteria, and puts in the billable hours—until a horrifically offensive incident at the firm’s summer outing throws the carefully constructed image way out of equilibrium.

Scrambling to do damage control, Parsons Valentine announces a new Diversity Initiative and commands a reluctant Ingrid to spearhead the effort, taking her priority away from the enormous deal that was to be the final step in securing partnership. For the first time, Ingrid finds herself at odds with her colleagues—including her handsome, golden-boy boyfriend—in a clash of class, race, and sexual politics.

Wan’s insight on cultural and gender diversity in the workplace—and the unique glass ceiling women face—is provocative, fresh, and sparks an important conversation.

ABOUT THE AUTHOR: HELEN WAN was Associate General Counsel at the Time Inc. division of Time Warner Inc. Before that, she practiced corporate and media law at law firms in New York. Born in California and raised near Washington, D.C., Wan is a graduate of Amherst College and the University of Virginia School of Law. Her essays and reviews of fiction have been published in The Washington Post and elsewhere. She lives in Fort Greene, Brooklyn, with her husband and son.

Read ‘A Conversation with Helen Wan’ after the jump.

A CONVERSATION WITH HELEN WAN

Q: What do you think are the most pressing issues regarding women in the workplace?

A: The elusive ideal of “work-life balance” and the raging debate over whether it’s really possible to Have It All. Why do so many talented, ambitious women disappear from the career pipeline? Why do so many capable women reach a certain nearly-there, also-ran point in their careers yet still feel like outsiders at work, not quite convinced they’re full-fledged, card-carrying members of The Club like their male peers? And why is the family/career juggling act still largely thought of and talked about only on the sidelines as a “women’s issue”?

Q: What actions can be taken to address these issues?

A: I’ve recently had the honor of speaking at a great many workplaces about my novel, and I’m encouraged by what I see. A lot of companies are finally getting serious about trying new things to retain and promote top female and diverse talent. A few examples:

• TRAINING.  Substantive trainings starting at very junior levels, including training women and minorities on how to identify and cultivate real relationships with mentors and sponsors both in and outside of the company, and then providing actual access to senior executives to allow this kind of meaningful interaction to happen.

• TONE-SETTING. Unless the right tone is set at the top, no progress will be made. If the C-suite sends a loud message that promotion of women and minorities is an actual and important business objective, change will happen.

• MEASUREMENT & COMPENSATION.  What gets measured gets done. Some companies are smartly tying managers’ compensation to actual metrics on how well they’ve done in a given time frame advancing women and minority employees on their team. In other words, supervisors need to have more skin in the game.

Q: The heroine of The Partner Track, Ingrid, is torn between the prestige of partnership and her budding relationship with her “golden-boy” colleague. How do you think women can best balance the dichotomy between work and play? When is it okay to mix business and pleasure?

A: Ah, the “mixing business with pleasure” question. One of the most fascinating things as a new novelist has been seeing the intensely emotional reader reactions stirred up by this particular Golden Boy character. By a mile, it is Ingrid’s relationship with him that dominates the questions I get asked by women readers. Was he just pretending to be into her? Was she in love with him? Did you consider an alternate outcome to their relationship? I do see a lot of successful professional women dating people in the workplace, and I think that’s as much out of necessity and convenience as anything else. We spend so many of our waking hours in the office. Where and when else are we ever going to meet anyone?

On some level, Ingrid already knew it was in the Bad Idea Handbook to date a male colleague, but took the plunge anyway. I think lots of women in her position would take the same calculated risk. (And this particular Golden Boy is really HAWT.)

Q: Still on the question of mixing business with pleasure—is there a double standard here?

A: There’s a whole other dimension to this dating issue that I don’t think men have to deal with, and that is the success gradient. In the book, Ingrid explains her theory on why it’s so much harder for successful women to find people to date than men. And it has to do with society expecting women to “date up,” while men are free to date up, down, across, over and under the career, success, age, education, and income gradients with reckless abandon. For the single professional woman, then, and as a sheer numbers game, this is a self-defeating strategy.

Q: Where do you think the glass ceiling for women in high powered jobs stems from? How can women break through the many stereotypes laid out for them?

A: For better or worse, it’s simply human nature that people feel more comfortable with other people who look, talk, sound, and act in ways that seem familiar to them – at least at first. Let’s face it, it’s just easier for Bob to casually ask Steve to go grab a beer after work than to ask Zhang Liu the same thing. That’s why employers need to take a hard look around at their workplace, and figure out what unconscious biases might be informing their hiring, staffing, and promotion decisions.  I actually believe the majority of stereotyping by employers that hinders women and minorities is unintentional and unconscious. In fact, it’s the very benignness of many stereotypes of women and minorities that render them so hard to pinpoint and eliminate.

Q: Your book is inspiring and empowers women to succeed.  How closely does your protagonist’s experience mirror yours?

A: I’d grown up in a fairly traditional, conservative Asian American household, and had been taught that America was a land of not just opportunity but meritocracy, where what you had to do was work very hard and follow the rules, and your hard work would be recognized and rewarded. It was all theory until, at the age of twenty-five I had suddenly landed in a very rarefied, privileged corporate law world that felt truly alien to me. I might as well have landed on the moon.

I was utterly unfamiliar with the subtle corporate culture of humblebrag and schmoozing and networking. I didn’t even know that it was much more important to show my face at the Fridays at Five cocktail hour than to spend that same hour holed up in my office, invisible, diligently finishing up my Asset Purchase Agreement. Like Ingrid, I had so much to learn.

Q: Why did you write THE PARTNER TRACK?

A: Like many other women who are good rule-followers and good at school, I went out in search of a book that could tell me how a young woman could succeed on the corporate ladder while still being an “authentic” self.  But I couldn’t find any books that spoke to me. I was not seeing any credible contemporary stories out there about young women (let alone a young woman of color!) navigating the dynamics of corporate America. Finding none, I decided to write one myself.

Q: Do you have any advice for young women entering the workforce?

Yes. Raise your hand. Take (educated) risks. Don’t be afraid to ask or answer questions in front of your peers. If there’s something you want (and know why you want it and can run with it), then for Heaven’s sake, ask for it. Learn to gracefully accept the credit for a job well done. If there’s one thing I’ve learned over this past year (by the way, I don’t really recommend giving birth to a first book and a first baby in the same year, while holding down a full-time legal job), it’s that women are hardest on ourselves. Most women I know tell me they’re already leaning so far in that they feel they’re about to topple over completely. I can relate to this. I’ve learned to remind myself, on a daily basis, that perfection is the enemy of the very, very good.

Ultimately, I’m not sure that continuing to talk on and on about Having It All is that useful for women on the whole. I’m not convinced that’s the best yardstick for measuring personal success or happiness. This is something I’ve been doing a lot of thinking about recently, and a key idea in my new novel that I’m working on now. Maybe it is possible to Have It All, just not All At The Same Time. And maybe, that can be enough.

We would appreciate receiving two tear sheets of any review or mention. To request additional review copies, please contact:

You’re a writer. We know it. You know it.

This Sunday, June 8, at the Issue Project Room in Brooklyn, the Asian American Writers’ Workshop is hosting its 2014 Publishing Conference. We encourage all AABANY members interested in writing & being published to attend. AABANY members Helen Wan & Blossom Kan have already been published. Who says lawyers can’t be writers (or at least have their writing read beyond the courthouse or law firms)?