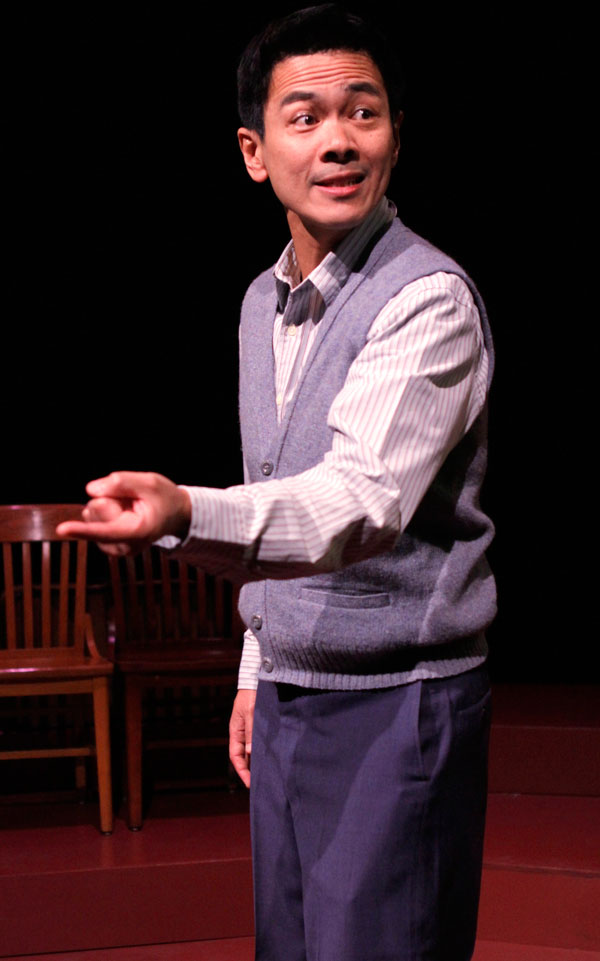 The Journey of Gordon Hirabayashi
by Jeanne Sakata
Directed by Lisa Rothe
ONLY 8 SHOWS LEFT!
Sat, 11/17 @ 7pm; Sun, 11/18 @3pm and 7pm; Mon, 11/19 @7pm;
Fri, 11/23 @ 7pm; Sat, 11/24 @ 7pm; Sun, 11/25 at 3pm and 7pm
Joel de la Fuente stars in Jeanne Sakata’s one-man show
inspired by the true story of first generation Japanese-American Gordon Hirabayashi, a college student during WWII.  Agonizing over the forcible removal of all people of Japanese ancestry on the West Coast. Gordon journeys toward a greater understanding of America’s triumphs—and a confrontation with its failures. In May of 2012, Gordon Hirabayashi was awarded the Medal of Freedom, the nation’s highest civilian honor, posthumously by President Obama.
Epic Theatre extends a special offer!  You can get tickets to any of these shows for $30 by using the code “EPJS30” when you purchase on the web: http://epictheatreensemble.org/holdthesetruths

Join the Asian American Legal Defense and Education Fund for a night at the theater!

A one-man show inspired by the true story of Japanese American civil rights hero Gordon Hirabayashi.  Agonizing over the forced removal of Japanese Americans to concentration camps during World War II, Gordon journeys toward a greater understanding of America’s triumphs – and a confrontation with its failures.  www.EpicTheatreEnsemble.org/HoldTheseTruths

With a special Q&A after the performance with playwright Jeanne Sakata and former Acting U.S. Solicitor General Neal Katyal

Jeanne Sakata made her playwriting debut with her solo play, Hold These Truths (formerly Dawn’s Light: The Journey of Gordon Hirabayashi), which received its world premiere in November 2007 in Los Angeles. The play was also the inspiration and theatrical centerpiece for the 2009 civil rights symposium on the Hirabayashi case at the University of Tennessee, “Civil Liberties, National Security and the Legacies of the Japanese Removal and Incarcerations.”

Neal Katyal is a partner at Hogan Lovells in Washington, DC.  He previously served as Acting Solicitor General of the United States and as a law professor at Georgetown University Law Center.  Katyal has argued several cases in the U.S. Supreme Court, including Hamdan v. Rumsfeld (2006), a constitutional challenge to the military tribunals at Guantanamo.

*Note early curtain time. The event will end in time for you to watch the presidential debate that evening!