On May 5, 2022, AABANY held a kick-off event for Fiscal Year 2023 at Allen & Overy. The new Fiscal Year began on April 1. Vice President of Programs and Operations Beatrice Leong, together with Executive Director Yang Chen, provided an orientation for new co-chairs and vice-chairs and a refresher for returning chairs on information and resources available to them to facilitate their work organizing programs and events for AABANY members and the broader community. (VPPO Joe Eng was unable to attend due to pressing work obligations.)

The 2023 cohort of Committee leadership learned best practices for being a leader of AABANY and learned how to plan and host events. AABANY’s Committee Chairs are ready to put on exciting events, panels and CLEs that all members look forward to.

After the orientation, the attendees got to meet each other and mingle at Faces & Names Bar and Lounge, a few blocks north of Allen & Overy’s offices.

We thank Allen & Overy for donating their beautiful space and for being a strong sponsor of AABANY. We also thank our Committee leaders for their dedication to AABANY. Special thanks to Kevin Hsi, Co-Chair of the Government Service & Public Interest Committee for his photos of the event.

See https://www.aabany.org/page/CommitteesPage2022 for the list of all current Committee Chairs.

Please check the AABANY Calendar often to see the events being presented by our Committees. https://www.aabany.org/events/event_list.asp

IAKL and KALAGNY are co-hosting the 2014 International Association of Korean Lawyers’ 22nd Annual Conference at Fordham University Law School from October 2-5, 2014.  The Conference will feature cutting-edge legal and educational programs, dinner events and exciting daytime activities in and around New York City.  We expect to have in attendance attorneys, judges, general counsels, law professors and many other legal and business professionals from the greater NY area and from around the world.

Reserve here for special conference rates at the Hudson Hotel. 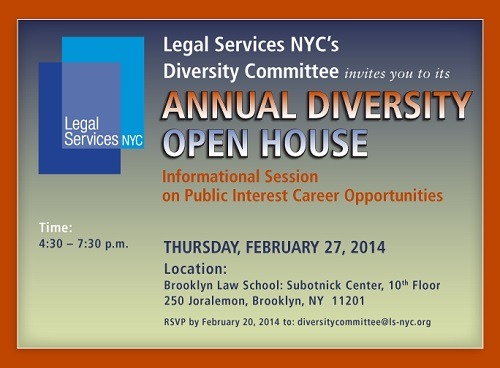 February 27, 2014 – Diversity Open House is an unique opportunity for law students to learn about the important work done at Legal Services NYC, to meet our attorneys and find out about internship, fellowship and possible employment opportunities. Legal Services NYC is the largest provider of free civil legal services in the country and has neighborhood programs in all five boroughs. See, www.legalservicesnyc.org

The format of the Open House is fairly informal. The first hour of the program is table time. Each Legal Services NYC program will have a table staffed by an attorney or two who is available to meet with law students. Then there is a program consisting of brief staff presentations about our vital work and innovative projects. After these presentations there is time for more tabling. The Open House will end with a reception with light refreshments and this is another opportunity for students to meet and network with staff attorneys. Leadership from the various offices will attend the event

All law students must rsvp by February 20, 2014 to diversitycommittee@ls-nyc. org 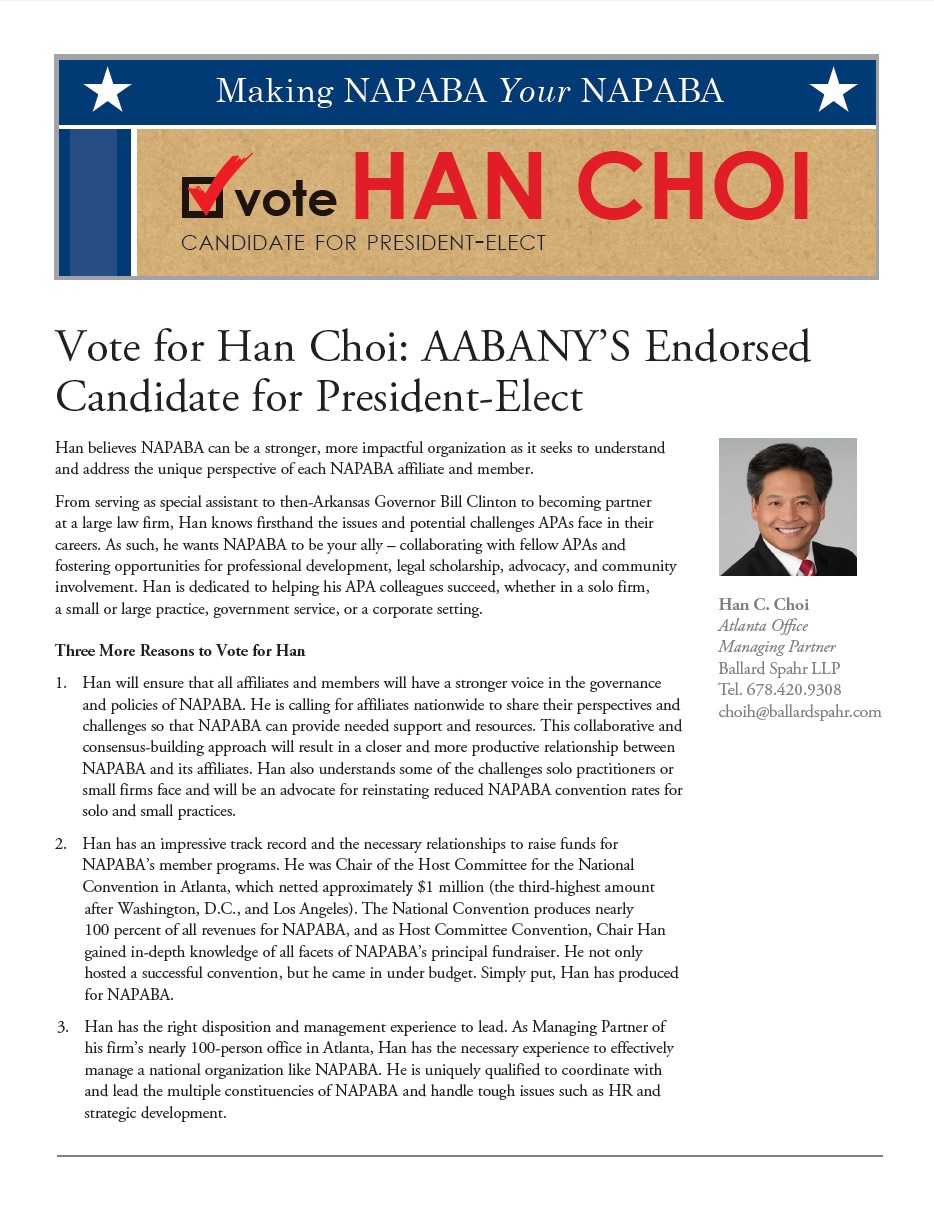 On January 24, 2013, AABANY held its Annual Meeting. It was hosted by Cravath, Swaine & Moore, in their New York office, and the firm generously provided space, food and drinks for all our attendees.  At the meeting, many AABANY members and friends got to meet and mingle before the business portion of the Annual Meeting began. President Jean Lee led the meeting and invited members to cast their votes for officers and directors if they had not already done so. While the votes were being counted, she gave an overview of AABANY’s active and productive year in 2012. Executive Director Yang Chen reported on the activities of AABANY’s numerous committees, after which he announced the Outstanding Committee of the Year award. This year’s top committee was the Women’s Committee for the excellent variety of substantive programs and networking events that greatly enhanced AABANY and its mission. President-elect Mike Huang gave closing remarks and would have announced the results of the election had they been ready at that time, but they were not, so the audience was invited to continue enjoying food, drink and each other’s company. At about 8:45 pm, the results were ready, and Mike proudly announced that the following Officers had been elected:

The following Directors were elected:

AABANY’s Year-End Report for 2012 was distributed at the meeting along with the current issue of AABANY’s newsletter, The AABANY Advocate. To review a copy of the Year-End Report online go to http://bit.ly/ann_rpt13.