A native New Yorker, Ms. Yu joined the Manhattan District Attorney’s Office in 2005. She has extensive experience handling cases and investigations in the Office of the Special Narcotics Prosecutor and Special Investigations Bureau. She was one of the five inaugural ADAs in the Crime Strategies Unit, created by the District Attorney in 2010. Appointed Co-Director of the Manhattan District Attorney’s Immigrant Affairs Program in 2011, Ms. Yu has worked within the department and with community leaders to investigate and prosecute crimes affecting the immigrant community as well as educate the public about immigration fraud. In 2013, Ms. Yu handled the high profile ‘Chinese blessing’ scandal in the Chinatown community, which preyed on the fears of religious elderly Chinese immigrants historically averse to reporting crimes to the police. In elaborate multi-person schemes, the perpetrators switched victims’ bags of money and jewelry with water bottles and newspaper clippings in fraudulent ceremonies meant to bless and spiritually cleanse the victim’s families. The NYPD Asian Jade Society is recognizing Ms. Yu’s service and impact in making the Chinatown community a safer place.

Ms. Yu has been active with AABANY as Co-Chair of its Prosecutors’ Committee, which seeks to promote the interests of Asian Pacific American (APA) prosecutors in New York at the county, state and federal levels. In this capacity, Ms. Yu has organized events and programs that benefit the professional development and advancement of APA prosecutors, including AABANY’s annual Prosecutors’ Reception at the New York County Lawyers’ Association, which has become one of AABANY’s signature events attended by the District Attorneys of each of New York City’s boroughs and the United States Attorney for the Southern District of New York, among others. In addition, Ms. Yu has collaborated with AABANY’s Immigration and Nationality Law Committee to educate the APA community about immigration fraud and how not to fall victim to it. Through her leadership role in the Prosecutors’ Committee, Ms. Yu helps AABANY connect with the District Attorneys’ offices across New York City, so that AABANY can play a role as an advocate and resource to the APA community.

“AABANY is proud of Rosemary’s recognition by the Asian Jade Society as a Lifetime Community Service Award recipient,” says Executive Director Yang Chen. “Our association has long known about and benefited from Rosemary’s ties to the community and her considerable talents and energy as a prosecutor and public servant. We commend the Asian Jade Society on its choice of Rosemary as an honoree. She is not only highly worthy and deserving of the honor, but we are confident that she will continue to earn praise and accolades in the years and decades to come.” 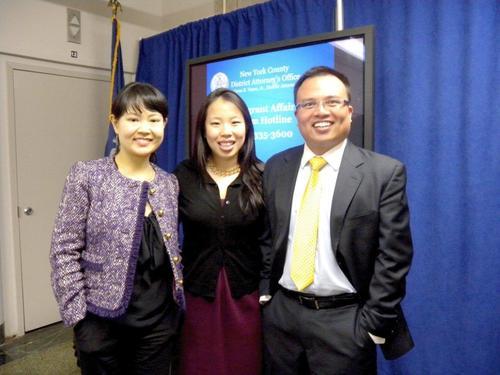 Rosemary Yu, Co-Director of the New York County DA’s Immigrant Affairs Office (and AABANY member), shares the following press release about the ongoing efforts of her office to stop immigration fraud which has victimized our immigrant communities:

Manhattan District Attorney Cyrus R. Vance, Jr., announced today the indictment of JOSE DELVALLE, 32, for stealing approximately $6,000 from immigrants by promising to obtain labor certifications and green cards for them, and falsely claiming that he had a contact who worked for immigration authorities capable of helping them. The defendant is charged in New York State Supreme Court with Criminal Possession of Stolen Property in the Third Degree, Scheme to Defraud in the First Degree, and Grand Larceny in the Fourth Degree.  The District Attorney’s Office launched an investigation into the defendant’s criminal activity when the victims contacted the Office’s Immigrant Affairs Program.

“More than half of the 2,400 calls to my Office’s Immigrant Affairs Program Hotline over the years relate to scams involving individuals claiming to offer legitimate immigration services, when, in fact, they do not,” said District Attorney Vance. “The circumstances of each crime vary – sometimes, the defendants represent themselves to be attorneys. Other times, the defendants target members of their own immigrant community. However, these crimes all share one thing: a willingness on the part of the defendants to take advantage of people who are new to this country, not fluent in the language, and struggling to navigate a complex legal and social services system. I encourage anyone who feels he or she may be the victim of an immigration scam to call my Office’s Immigrant Affairs Program Hotline at 212-335-3600, regardless of immigration status.”

According to documents filed in court and statements made on the record in court, the defendant worked with the victims – two Ecuadorean immigrants – at a parking garage in Northern Manhattan. Between October and November 2010, DELVALLE is accused of befriending the two victims, telling them that he had a contact who worked in what he termed “immigration,” and promising to get them their labor certifications and green cards if they paid him $6,000 apiece: $3,000 up front, with the remainder to be paid after they received the documents. The defendant allegedly told his victims that it could take them anywhere from six months to one year for the cards to arrive. When they did not receive them, they contacted the defendant, who soon stopped taking their calls.  It was at that point that the victims reported the scheme to the District Attorney’s Office.

DELVALLE is not an authorized provider of immigration services, and no immigration filings were ever submitted on behalf of the two victims.

District Attorney Vance thanked the Office of Fraud Detection & National Security, within U.S. Citizenship and Immigration Services, New York District, and the Executive Office for Immigration Review, within the United States Department of Justice, for their assistance in this investigation.

Manhattan District Attorney Cyrus R. Vance, Jr., announced the guilty plea of HIT SHRESTHA, 44, a Nepalese national, for systematically defrauding other Nepalese nationals of thousands of dollars. The defendant pleaded guilty in New York State Supreme Court to Scheme to Defraud in the First Degree for falsely promising her victims that she would arrange for their family members from Nepal to immigrate to the United States, and for charging her victims large fees for the promised service.

Congratulations to the NY County DA’s Immigrant Affairs Program and its co-director Rosemary Yu for this victory.  ADA Yu is a member of AABANY and its Prosecutors’ Committee, which she co-founded.

Read the rest of the press release here

On Sunday, April 22, Tsui Yee, co-chair of AABANY’s Immigration and Nationality Law Committee, spoke at a community seminar aimed at helping members of the Chinese-American community learn about immigration service fraud and how to prevent it.  The event was co-sponsored by AABANY with the New York County District Attorney’s Immigrant Affairs Program, co-directed by ADA Rosemary Yu, also an AABANY member who helped to found the Prosecutors Committee.  To learn more about the event, click on the link in the title.

On April 25th the New York County DA’s Office issued the following press release.  AABANY member and a co-founder of the Prosecutors Committee, Rosemary Yu, was part of the prosecution team:

Manhattan District Attorney Cyrus R. Vance, Jr., today announced the arrest and indictment of HIT SHRESTHA, 44, a Nepalese national, for systematically defrauding other Nepalese nationals of thousands of dollars. SHRESTHA is charged with Grand Larceny in the Fourth Degree and Scheme to Defraud in the First Degree for falsely promising her victims that she would arrange for their family members from Nepal to immigrate to the United States, and for charging her victims large fees for the promised service.

Manhattan District Attorney Cyrus R. Vance, Jr., today announced the appointments of Assistant District Attorneys Mayerling Rivera and Rosemary Yu as co-Directors of the Office’s Immigrant Affairs Program. The Program was established in 2007 to investigate and prosecute fraud committed against immigrants, and to educate the public about immigration fraud and related issues through fraud prevention workshops and seminars. Since its creation, the Program has fielded more than 2,100 complaints.

“I would like to congratulate Assistant District Attorneys Mayerling Rivera and Rosemary Yu on their well-deserved appointments” said District Attorney Vance. “Keeping this city’s immigrant population safe is one of our top priorities. In their new roles, Ms. Rivera and Ms. Yu will spearhead our Office’s efforts to educate the public about immigration fraud and aggressively prosecute individuals who victimize our immigrant communities.”

Ms. Rivera joined the office in 1996 and spent eight years in Trial Bureau 70, where she prosecuted a variety of violent street crimes. During that time, she was also assigned to both the Sex Crimes and the Domestic Violence Units, and tried numerous felony sex crimes and domestic violence cases. In 2004, she transferred to the former Family Violence and Child Abuse Bureau, where she worked on both domestic violence and child abuse investigations. Recently, she has been assigned to the Special Victims Bureau, where she supervises domestic violence cases, conducts trainings, and handles U-Visa certifications. Throughout her career, Ms. Rivera has done extensive community work throughout the city, focusing specifically on Washington Heights. In addition to her case-related work, Ms. Rivera has frequently spoken on behalf of the Office on a variety of subjects including teen violence, child abuse, and domestic violence. A native New Yorker and fluent Spanish speaker who was raised in Washington Heights, Ms. Rivera is a graduate of Seton Hall University and received her law degree from Seton Hall University School of Law.

Ms. Yu is a native New Yorker who was raised in Chinatown. She joined the Office in 2005, following her graduation from Catholic University of America’s Columbus School of Law. Ms. Yu was initially assigned to the Office of the Special Narcotics Prosecutor, where she handled numerous felony narcotics cases and investigations. In 2008, she was one of four ADAs recognized by Special Narcotics Prosecutor Bridget Brennan for her outstanding case work. In 2009, Ms. Yu was assigned to the Special Investigations Bureau, where she worked almost exclusively with the Drug Enforcement Administration Task Force on long-term narcotics investigations using electronic eavesdropping and other investigatory tools. Ms. Yu was assigned last year as one of the five inaugural ADAs in the new Crime Strategies Unit, where she is currently responsible for intelligence coordination and understanding crime trends for the east side of Manhattan South. Ms. Yu is also one of the founding members of the Prosecutors’ Committee of the Asian American Bar Association of New York. She is a graduate of Stuyvesant High School and Claremont McKenna College. After graduating from college, Ms. Yu worked for one year for former U.S. Secretary of Labor Elaine L. Chao.

The appointments will be effective as of December 9, 2011.