NEW YORK – On Wednesday, February 26, 2014, the Asian American Bar Association of New York (“AABANY”) will hold its 25th Anniversary Annual Dinner at Cipriani Wall Street.  Attendees of the 2014 AABANY Annual Dinner will include prominent federal and state judges, elected officials and dignitaries, attorneys from large and small law firms, corporate law departments, prosecutors’ offices and government agencies.  AABANY’s 2013 Annual Dinner attracted more than 750 members of the legal and business communities from New York and beyond.  This year AABANY is pleased to announce that its 2014 Annual Dinner honorees will be:

Vernon E. Jordan, Jr. will receive the AABANY I4 Leadership Award.  The I4 Leadership award is presented to a leader who is an ICON, embodying the highest IDEALS and INSPIRING others while making a real and lasting IMPACT in the community and society.  Mr. Jordan, a Senior Managing Director at Lazard Frères & Co. LLC, the financial advisory and asset management firm, also remains Senior Counsel at the law firm of Akin Gump Strauss Hauer & Feld LLP, where he practices general, corporate, legislative and international law in Washington, D.C.

The Asian American Legal Defense and Education Fund (AALDEF), which was founded in 1974 and is celebrating its 40th anniversary, is a national organization that protects and promotes the civil rights of Asian Americans.  By combining litigation, advocacy, education, and organizing, AALDEF works with Asian American communities across the country to secure human rights for all.  AALDEF focuses on critical issues affecting Asian Americans, including immigrant rights, civic participation and voting rights, economic justice for workers, educational equity, housing and environmental justice, and the elimination of anti-Asian violence, police misconduct, and human trafficking.  AALDEF will receive AABANY’s Public Advocacy Award.

“We are deeply honored and humbled that such a legendary defender of legal rights as Vernon Jordan will be helping AABANY commemorate our 25th anniversary at our Annual Dinner, along with such notable leaders in their respective corporate and community legal spheres as Randal Milch and AALDEF,” said Mike Huang, AABANY President.

“NAPABA has a long-standing commitment to supporting the civil rights of all members of our community, including our LGBT brothers and sisters,” said William J. Simonitsch, president of NAPABA. “While NAPABA respects the sincerely held religious beliefs of all people, religion has unfortunately been misused by some historically as an excuse to oppress people of color and people of other religions. For many it justified slavery, segregation, and the criminalizing of interracial marriages. The employment of a religious justification to now excuse the discrimination of LGBT people is just as reprehensible.”

If Governor Brewer does not veto Arizona House Bill 2153/Senate Bill 1062 by this coming Friday, Arizona will soon allow individuals and for-profit corporations to discriminate against anyone if they claim to be acting in the name of their religious convictions. This includes refusing services to members of the LGBT community and denying equal benefits to women in the workplace. On its face, it could be used as justification for discriminating against anyone, on any grounds, so long as a free religious exercise claim is asserted.

“As a long-time citizen of Arizona and as a former President of the Arizona Asian American Bar Association, I believe that this bill does not represent our state, and we categorically denounce this and all legislation targeting disenfranchised groups, including the LGBT and immigrant communities,” said George C. Chen, president-elect of NAPABA. “Religious freedom is an important part of our society, but this bill is about legalizing discrimination, not about religious freedom. Governor Brewer needs to veto this bill.”

The National Asian Pacific American Bar Association (NAPABA) is the national association of Asian Pacific American attorneys, judges, law professors, and law students. NAPABA represents the interests of over 40,000 attorneys and 67 national, state, and local Asian Pacific American bar associations. Its members include solo practitioners, large firm lawyers, corporate counsel, legal service and non-profit attorneys, and lawyers serving at all levels of government. NAPABA continues to be a leader in addressing civil rights issues confronting Asian Pacific American communities. Through its national network of committees and affiliates, NAPABA provides a strong voice for increased diversity of the federal and state judiciaries, advocates for equal opportunity in the workplace, works to eliminate hate crimes and anti-immigrant sentiment, and promotes the professional development of people of color in the legal profession. 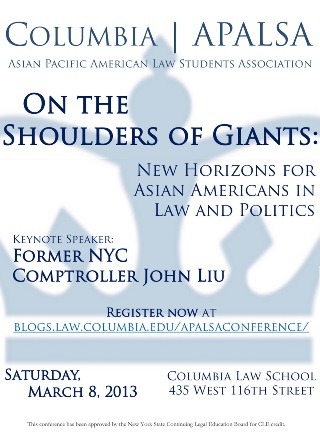 You Are Invited to Attend a Career Panel & Networking Reception

PALS is dedicated to enhancing the skills and careers of minority law students and early career attorneys. PALS does this by offering customized mentoring, educational and professional development opportunities. PALS provides resources to augment the law school and employer training of, respectively, minority law students and beginning lawyers, and will continue to offer its services free of charge.

Providing Mentoring, Career and Skills Development for Minorities in the Legal Profession Since 1984