On Thursday, January 24, 2019, Don Liu was featured as the Keynote Speaker at the Fourth Annual Alumni of Color Event of Columbia Law School. The event took place at the Intercontinental Barclay Hotel in Manhattan and was attended by over 200 Columbia Law School Alumnae.

of the challenges of being an APA Attorney and In House General Counsel. He praised all of the pioneering efforts of NAPABA and AABANY to support and encourage the future careers of many APA law students .

Of greater importance was how he inspired the audience with what Diversity and Inclusion meant to him and how important it was to embrace it.

We thank Margaret Ling, AABANY’s Director of Development and Co-Chair of AABANY’s Real Estate Committee, for providing the photos and write up for this post.

Governor Andrew M. Cuomo today signed legislation that begins the process of bringing New York State’s voting laws into the 21st Century, a central goal of his 2019 Justice Agenda for the first 100 days of the new legislative session. These historic new laws will allow for eight days of early voting before an election, synchronize federal and state primary elections, allow voter preregistration for teenagers, provide voter registration portability within the state, and close the LLC loophole.

To read the rest of the press release, please click here.

IP Committee members braved the rain on January 24 to meet up for sushi and drinks and celebrate the start of the new year. Members whose practices focus on different areas of intellectual property such as copyright, trademark, entertainment, and patent exchanged stories about their work. Ideas for future events were discussed, and we are looking forward to planning them over the next few months.

Summary and photo provided by Jeffrey Mok. Jeffrey is a co-chair of AABANY’s IP Committee. To learn more, click here.

NEW YORK, January 25, 2019 – New York City will celebrate its 2nd annual Fred Korematsu Day of Civil Liberties and the Constitution on Wednesday, January 30, 2019, hosted by the New York County Lawyers Association (NYCLA) at 14 Vesey Street from 6:30 pm to 9:00 pm. This event marks Korematsu’s 100th birthday. The Fred Korematsu Day of Civil Liberties and the Constitution is already officially recognized in four states and was first officially celebrated in New York City in 2018. Spearheaded by the Asian Practice Committee of NYCLA, the Asian American Bar Association of New York joins the New York Day of Remembrance Committee and numerous community groups to organize this historic event.

At the celebration, Asian American Bar Association of New York (AABANY) members will perform “Fred Korematsu and His Fight for Justice,” a reenactment of legal proceedings in Korematsu v. United States. Judge Denny Chin, United States Circuit Court of Appeals for the Second Circuit, and Kathy Hirata Chin, Partner at Crowell & Moring, will narrate the reenactment.

“Why the Korematsu Case Still Matters Today,” a panel discussion, will follow the reenactment. The panelists are Prof. Rose Cuison Villazor of Rutgers Law School and Afaf Nasher, Executive Director for the New York Chapter of the Council on American Islamic Relations, and Chris Kwok, AABANY Board Director and Issues Committee Chair, will be the moderator.

Fred T. Korematsu was a national civil rights hero. In 1942, at the age of 23, he refused to go to the government’s incarceration camps for Japanese Americans. After he was arrested and convicted of defying the government’s order, he appealed his case all the way to the Supreme Court. In 1944, the Supreme Court ruled against him, arguing that the incarceration was justified by military necessity.

In 1983, in light of new evidence of government misconduct, Korematsu’s 40-year-old case was reopened. On November 10, 1983, Korematsu’s conviction was overturned in a federal court in San Francisco. It was a pivotal moment in civil rights history.

Korematsu remained an activist throughout his life. In 1998, he received the Presidential Medal of Freedom, the nation’s highest civilian honor, from President Bill Clinton.

“AABANY is proud to help celebrate Fred Korematsu’s 100th birthday, on the occasion of the second annual Korematsu Day in New York City,” states Yang Chen, AABANY’s Executive Director. “AABANY was among the groups in New York that testified before the New York City Council in 2017 in support of commemorating January 30th each year as the Fred Korematsu Day of Civil Liberties and the Constitution in New York City. We were there last year for the inaugural celebration, and we are honored to be able to present one of our trial reenactments to recount the story of Fred Korematsu and his struggle for justice. The only way we can ensure that we as Americans never again repeat the gross injustice Japanese Americans suffered during World War II is to tell his story and share its many lessons with the general public.”

In the Summer of 2019, approximately thirty high school students will participate in judicial internships in state and federal courts, educational and professional development workshops, and mentorship opportunities. The students will intern with a state or federal judge located within one of the five New York City boroughs from Monday through Thursday for four weeks. The hours will likely be 9:00 a.m. – 4:00 p.m., subject to the individual judge’s discretion. On Fridays, the student interns will meet for educational and professional development workshops at the Thurgood Marshall Courthouse, 40 Foley Square, New York, NY from 10:00 a.m. – 2:00 p.m. Students are expected to honor these time commitments to participate in the program.

You may also refer to http://scsjip.org/hs_program.html for a downloadable version of the 2019 Application.

The winning lawyer and law student author will receive a cash prize of $1,500. The winning papers will also receive special recognition at the 2019 ACS National Convention and on the ACS website. Coauthored submissions are eligible and if selected, the coauthors will share the prize.

The competition is open to lawyers and law students. Deadline Feb. 3.

The Constance Baker Motley Writing Competition honors the legacy of Constance Baker Motley, a civil rights leader, elected official, and the first African-American woman appointed to the federal bench. Papers will be judged on their effective use, analysis and/or expansion of legal scholarship. The judging committee includes federal judges and leading academics.

The student authors of the top three papers will receive special recognition at the ACS National Convention in the summer of 2019 and a cash prize for their work. The winner will be awarded $3,000 and each of the two runners-up will receive $1,000. The top paper may also receive an offer of publication in the University of Pennsylvania Journal of Constitutional Law.

The Census Bureau is looking for Japanese, Tagalog and Vietnamese Partnership Specialists.

The jobs are limited term appointments. The initial appointments are not to exceed (NTE) 09/30/2020. The appointments may be extended or terminated earlier at management’s discretion.

To learn more about each of the vacancies, click on the links below. 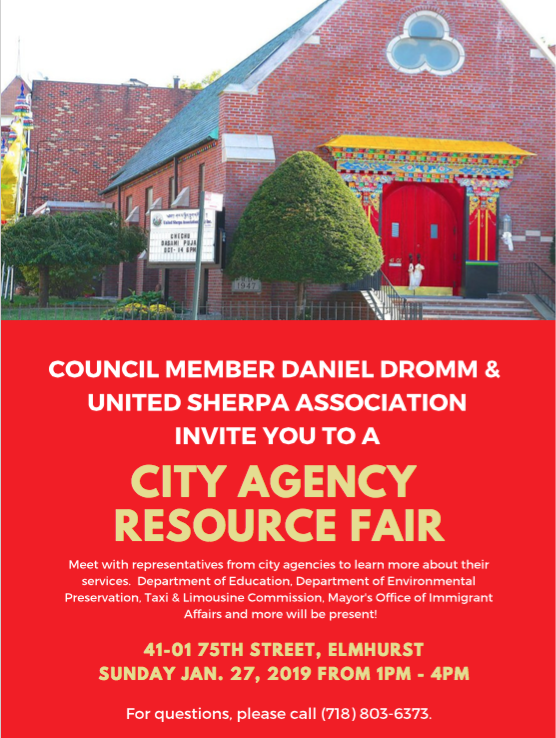 NYC Council Member Daniel Dromm and the United Sherpa Association invite you to a City Agency Resource Fair. Meet with representatives of various city agencies, which will include the Department of Education, Department of Environmental Preservation, Taxi & Limousine Commission and the Mayor’s Office of Immigrant Affairs.

Interested in what gets built in your community and how government works to deliver services in your neighborhood? Apply to join one of Manhattan’s 12 Community Boards.

Every Community Board has 50 seats which are filled for two-year terms by volunteers, who are selected by the Borough President and local City Council members. Half the seats are up for appointment or reappointment every year.

Community Boards get a seat at the table in high-stakes land use, real estate, and zoning negotiations, and they work directly with city agencies to influence how government services are delivered at the neighborhood level.

If you’d like to serve as a member of your Community Board, apply online here! You can also print the application and drop it off by mail or in-person. The deadline is February 8, 2019.