On Tuesday, December 17, the Academic Committee hosted their Annual Holiday Lunch at Dim Sun Palace in the East Village. Academic Committee Co-Chairs, Prof. Elaine Chiu (St. John’s), Prof. Suzanne Kim (Rutgers), and Prof. Donna Lee (CUNY) played hosts to a full table of members of friends who came to meet the Committee’s leadership and find out what events and plans they have in store for the balance of the 2019 fiscal year and beyond. Elaine, Suzanne, and Donna encouraged everyone to to save the date for a Pathways to Academia program being planned for January 24. They also asked for ideas and suggestions on how to get law students more involved with community service, such as by volunteering at the Pro Bono Clinic.

The fare at Dim Sum Palace was plentiful, varied, and delicious, and everyone enjoyed the dishes that were served. The weather outside was gloomy and damp but around our very full table, we were able to share a warm and satisfying meal among good company.

To learn more about the Academic Committee and how you can get more involved with it go to https://www.aabany.org/page/352 .

Please visit our website for more information or email Melanie Robinson at mrobinson@napaba.org with any questions. We look forward to seeing you in May!

Join the Asian American/Asian Research Institute for their annual conference, Rethinking New York City’s Asian American Communities, on Monday, May 5, 2014, from 8:30am to 5pm, at the CUNY Graduate Center, 365 Fifth Avenue, Concourse Level, Manhattan. This event is free and open to the general public, light breakfast and lunch provided.

Over the last 2 decades, the Asian American population in New York City has exploded with 110% growth, and is more diverse than ever, hailing not only from East Asia but from South and Southeast Asia, as well as from secondary migrations such as the Indo-Guyanese. Nearly 78% of NYC’s Asian Americans are foreign born.

To RSVP for the conference and to view the latest program, please visit www.aaari.info/2014communities.htm. Please be prepared to present proper identification when entering the CUNY Graduate Center.
For details on all of AAARI’s upcoming events, please visitwww.aaari.info. See you at the AAARI conference on May 5th! 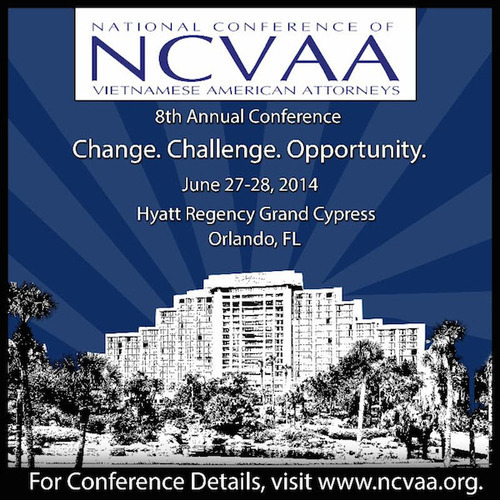 We look forward to seeing you at the

8th Annual Conference in Orlando.
NCVAA has been the largest law conference in the United States for Vietnamese American attorneys and law students since 2006.
Don’t miss this rare opportunity to network with nationally renown Judges and Law Professors, as well as top attorneys and legal leaders, from all across the country.
Register TODAY.  Early bird prices expire on May 1, 2014.
To register for the conference and for more information, visit:
www.ncvaa.org
We have a limited number of rooms reserved at discounted rates. To reserve your hotel room, visit:

and select “Attendee” as your guest type.

For sponsorship or speaker information, please contact the Conference Co-Chairs:

The National Asian Pacific Bar Association (NAPABA) celebrated its 25th Annual Convention in Kansas City, MO, last November.  The four-day convention was themed Momentum to celebrate the continuing growth and progress in the Asian Pacific American (APA) legal community, and brought more than 1,200 attendees to the show-me state.  Among awards given out at the annual convention is the highly coveted NAPABA Best Lawyers Under 40 (BU40) Award. MCCA’s bi-monthly publication, Diversity & the Bar, profiled these award recipients, including AABANY members and leaders, Mike Huang, Michael Park and Asim Rehman, in the January/February 2014 issue. Read more here.

WASHINGTON, DC – The National Asian Pacific American Bar Association (NAPABA) has selected its annual convention host cities for 2014-2016. The Annual NAPABA Convention will be held in:

“We are pleased to announce the host cities for the 2014-2016 Annual Conventions,” said Wendy Shiba, president of NAPABA. “We look forward to expanding NAPABA’s presence, engaging membership, and working with NAPABA’s affiliates and the local communities in these host cities.”

The process for selecting host cities breaks new ground from the bidding process that NAPABA has previously used. Several factors were considered during the selection process, including the presence of emerging Asian Pacific American and legal communities; hotel and convention site capacity of potential host cities; relative cost; and a desire to include regions that have not hosted a NAPABA convention recently or ever. New Orleans and San Diego will be first-time host cities and Scottsdale hosted in 2001.

“We are excited that Arizona will be hosting the NAPABA Convention in 2014,” said Mingyi Kang, president of the Arizona Asian American Bar Association. “We are grateful that NAPABA is changing the way the Convention is being hosted and are positive that this change will enable more local chapters to host the NAPABA Convention, increasing NAPABA’s profile, and encouraging more APAs to join and be more involved in our organizations and in the community in general.”

“On behalf of LAPABA, we are absolutely thrilled to have been chosen to host Convention 2015 in New Orleans! This is an unbelievable opportunity, bringing our entire NAPABA family to our great home city for the first time, ever,” said Christine C. Bruneau, president of the Louisiana Asian Pacific American Bar Association. “We look forward to fantastic speakers and programs, seeing old friends and colleagues and meeting new ones, and some truly amazing food, culture, and history!”

The 25th Annual NAPABA Convention, Momentum, will be held in Kansas City, Missouri from November 7-10, 2013.

The National Asian Pacific American Bar Association (NAPABA) is the national association of Asian Pacific American attorneys, judges, law professors, and law students. NAPABA represents the interests of over 40,000 attorneys and 66 state and local Asian Pacific American bar associations. Its members include solo practitioners, large firm lawyers, corporate counsel, legal service and non-profit attorneys, and lawyers serving at all levels of government. NAPABA continues to be a leader in addressing civil rights issues confronting Asian Pacific American communities. Through its national network of committees and affiliates, NAPABA provides a strong voice for increased diversity of the federal and state judiciaries, advocates for equal opportunity in the workplace, works to eliminate hate crimes and anti-immigrant sentiment, and promotes the professional development of people of color in the legal profession.