Applications may now be submitted for the 2019 Don H. Liu Scholars Program. The Program was founded in 2014 by two past presidents of the Asian American Bar Association of New York.  The Program seeks to identify and cultivate future Asian American leaders in the legal community to address the single most important reality facing Asian American professionals today – the barrier to advancement.

This year, the Selection Committee will select up to 3 scholars.  Each scholar will be awarded $15,000 and have access to prominent mentors, including Don H. Liu, Executive Vice President, Chief Legal Officer and General Counsel of Target Corporation.   Additionally, scholars will have assistance in securing summer internships. Details and more information about the Program can be found here:  http://www.donhliuscholars.org/ and on the

To be eligible for the Program, the applicant must be of Asian descent and be enrolled full-time as a 1L (and be expected to graduate in 2021) in a law school in Connecticut, Delaware, Maryland, Massachusetts, New Jersey, New York, Pennsylvania or the District of Columbia.  Application materials are due on November 23, 2018. For more details on the application process and eligibility requirements, please follow the link in the title to see the application package.

AABANY encourages any interested parties who meet the above requirements to apply.  If there are any questions, please feel to email Ligee Gu, [email protected]

Named for Norman Lau Kee, a revered legal and community pillar of New York City’s Chinatown for decades, this Trailblazer Award honors an accomplished leader in the legal profession of Asian Pacific American (APA) descent or dedicated to APA issues who has carved a path for others to follow, served the community as a mentor and role model, and has made a lasting impact on the APA community through his or her dedication and commitment.

Marilyn D. Go, United States Magistrate Judge for the Eastern District of New York, was the first Asian American woman to serve as a judge in a federal court.  After graduating from Harvard Law School in 1977, she clerked for the late Honorable William M. Marutani in Philadelphia, who was the only Asian American judge on the East Coast at the time. She then served as an Assistant United States Attorney in the Civil Division of the U.S. Attorney’s Office for the EDNY and was later a partner at Baden Kramer Huffman Brodsky & Go, P.C.  Committed to promoting diversity and professionalism in the bar, Judge Go was a founding member, officer and director of the Asian American Bar Association of New York; chair of the Voting Rights Committee of NAPABA; Vice Chair of the Standing Committee on Minorities in the Judiciary of the American Bar Association; and a member of Governor Cuomo’s Task Force on Minority Representation on the Bench.

“Judge Go is a true trailblazer in our community,” Yang Chen, AABANY’s Executive Director, states. “She rose to the top of the legal profession as an attorney and judge at a time when women leaders, particularly APA women, were few and far between. Through her achievements, accomplishments and leadership, she has paved the way for future generations of lawyers to succeed and attain prominence. As one of the founding Board members of AABANY, she helped to lay the foundation for future leaders to grow the organization into the great bar association it is today. Because of the trails she has blazed, Judge Go has made a real difference for APA attorneys and the legal profession. We are proud to count her as a leading member of our association and our community.”

The Women’s Foreign Policy Group believes that it is crucial to ensure that women’s voices are heard and that women leaders are fully engaged in finding new approaches and solutions. WFPG is committed to global engagement and the promotion of the leadership, visibility and participation of women in international affairs. The organization advances women’s leadership and highlights their contributions through international issues programs and mentoring.

Interns work as part of the WFPG team and are given the opportunity to improve their knowledge of international issues, as well as to learn how a small nonprofit organization operates.  At our programs, interns meet with accomplished international affairs professionals and learn from their career paths. Part-time internships are unpaid or for college credit. Full-time interns who commit to 3.5 months during the school year or 3 months during the summer are eligible for a $1,000 stipend.

WFPG is seeking four interns to assist them in Washington, DC during the upcoming semester:

General Internship:
WFPG is looking for responsible and motivated interns to focus on planning and outreach for programs featuring international affairs officials and experts. In addition to assisting with our Author and Embassy Series programs, interns contribute to benefit luncheons and mentoring fairs. Interns will also research foreign policy topics before events, update the WFPG database, and complete other office tasks as assigned.

Communications Internship:
WFPG is also looking for a specialized intern to focus on our website and communications materials, including our invitations and newsletters. The communications intern will also assist at events, conduct foreign policy research, and complete other office duties as assigned. A demonstrated interest in and knowledge of basic HTML and photo editing/layout software is helpful, but not required.

Qualifications:
Competitive candidates for both positions should have a demonstrated interest in foreign affairs and excellent computer skills. Interns must possess outstanding office and phone manners, and excellent writing skills, in addition to being well-organized, punctual, dependable, flexible, attentive to detail, and able to work both independently and as part of a team.

Applicants must be available to work a minimum of two full days per week.

To Apply:
Please send a cover letter (including your availability), resume, two-page writing sample (short paper or excerpt), contact information for three references, and an unofficial copy of your transcript to [email protected].  Applications can also be mailed to:

Please visit our website for more information or email Melanie Robinson at [email protected] with any questions. We look forward to seeing you in May!

AsianInNY is a proud sponsor for the Forum on Politics and Governance: Lessons from the experience of Elected Asian American Leaders at the Philippine Consulate General in New York.

Learn from the lessons through the top Asian American Leaders including:

100 seats only including free admission, drinks and light hors d’oeuvres. 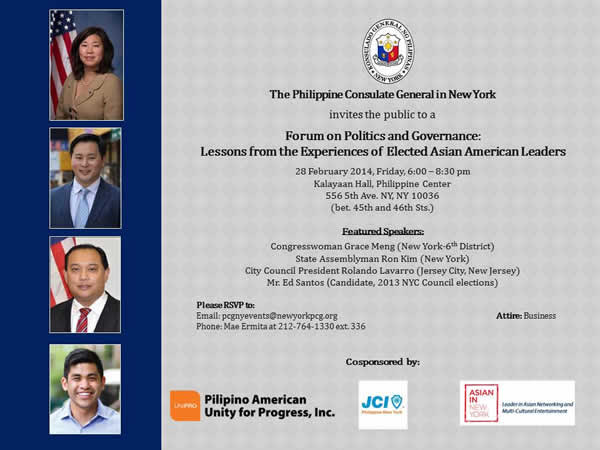 The White House Initiative on Asian Americans and Pacific Islanders will convene federal officials and faith-based and community leaders in a day-long forum to share key Administration policies on economic growth, immigration, education, and civil rights. The forum will provide leaders and the broader AAPI community critical information and a better understanding of federal resources and services.

The focus of the WHIAAPI Community Forum is to accomplish three key goals:

1.    Establish a space where faith-based and community leaders can meaningfully engage and interact with federal officials;

3.    Share opportunities for leaders to collaborate with the Obama administration.