​​A New Yorker with over thirty years of legal and administrative experience, the majority of which has been in public service, Justice Oing stands out as the candidate with the most experience in all three branches of government — judicial, legislative, and executive.

This breadth of experience makes Oing the ideal judge to help make government work better for all New Yorkers.  Indeed, before his illustrious career on the bench, Oing served as Deputy General Counsel to the New York City Council and worked on issues such as re-districting under the Voting Rights Act.

If Oing is nominated, Hochul will have full confidence that she is selecting an experienced judge who understands well how government works and who has dedicated his professional career to public service and delivering justice.

The op-ed concludes with the statement that New York has never had a judge of Asian American and Pacific Islander descent sitting on its highest court, and Governor Hochul would not only be appointing a highly qualified jurist to serve as Chief Judge, she would also be making history and adding much needed diversity to the state’s highest court.

We expect Gov. Hochul to announce her decision by Dec. 23, and AABANY continues to urge the Governor to nominate Justice Oing to be Chief Judge of the New York Court of Appeals.

On December 16, AABANY sent a letter to Governor Hochul calling on her to reject the New York City Bar Association’s “not well qualified” rating of Hon. Jeffrey K. Oing. AABANY was joined on the letter by the National Asian Pacific American Bar Association (NAPABA) and the following New York bar associations:

The letter can be found here.

The Women’s Trial Lawyers Caucus separately sent a letter to the Governor indicating its support for both Justice Oing and the call to reject the “not well qualified rating.”

All signatories were unanimous in calling on the Governor to reject the bizarre outlier rating given by the New York City Bar Association, with reference to the New York Law Journal article (subscription required) from Dec. 14 about the controversial and unusual rating.

AABANY stands by its statement released on December 12 endorsing Justice Oing as the most highly qualified candidate for the Chief Judge of the New York Court of Appeals and continues to urge the Governor to nominate him as Chief Judge. 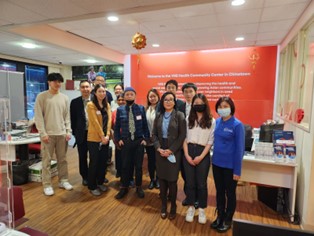 Overall, we met with 11 clients who had questions about topics such as immigration, housing, and divorce. With help from our many clinic attorneys and volunteers, AABANY’s PBCS attorneys were able to connect clients with AABANY’s Legal Referral and Information Service, a program that connects prospective clients from the Asian American and Pacific Islander community with qualified lawyers who are both linguistically and culturally competent.

AABANY’s PBCS intern Connor Li spoke about his experiences at Saturday’s clinic with great reverence for the work PBCS is able to do through these clinics. He said, “It’s always a pleasure to help out at the clinic. Whether it’s meeting members of the community or listening to experienced legal professionals, I always feel like I’m learning something at every point. And with the help of the amazing VNS staff, clients with urgent needs for legal advice regarding housing, immigration, and familial issues were checked in and assigned to attorneys with great expediency. We were even able to provide Cantonese and Mandarin interpreters at nearly every client meeting, though we could definitely have used the assistance of more Cantonese interpreters. I would definitely encourage more AABANY members or willing individuals from the general public who know Cantonese to come to these clinics. Your help would be appreciated!”

As with every clinic, free lunch was provided for all attorney and non-attorney volunteers by PBCS. We thank all 11 of our volunteers for coming to provide their invaluable assistance! As always, if you have any questions about upcoming clinics, please contact us at probono@aabany.org. Thanks again for attending, and happy holidays!

Please make plans to join us as a volunteer at the next Manhattan Pro Bono Clinic on January 14, or please help us spread the word. More details here.

On November 29th, AABANY’s Anti-Asian Violence Task Force (AAVTF) led by Chair Elaine Chiu and member Jim Lin, attended the sentencing of Tammel Esco in support of the survivor of a horrific act of hate that took place in Yonkers on March 11, 2022. AAVTF member Jennifer Wu represented the survivor pro bono as the case against Esco proceeded through the courts and accompanied the survivor, together with co-counsel Johan Tatoy (also an AABANY member) at the sentencing.

Tammel Esco was arrested after he brutally beat a 67-year-old Filipino-American woman at the entrance of her Yonkers apartment. Esco pleaded guilty to the charge of first-degree assault as a hate crime and was sentenced to 17-1/2 years in prison followed by five years of supervised release. Judge Minihan presided at the sentencing and recounted Esco’s sad history. She offered him the chance to apologize or explain himself, but he declined. In her victim impact statement, the survivor stated, “A complete stranger heartlessly spit, beat, and kicked me over 100 times just because of my heritage. I lost months of my life. I will forever be on edge.” Currently, she remains in stable condition, yet had to move out of her longtime home due to the traumatic event.

After the sentencing, AABANY members had the chance to meet the District Attorney of Westchester County, Mimi Rocah, at her press conference, where Jennifer Wu commented on the survivor’s behalf, stating, “Leaving the home that you’ve had for 24 years and where you raised your daughters, is incredibly painful.” During the meeting, AAVTF members offered proposals on statutory reform and how to prevent such gruesome cases from occurring in the Asian American community in the future. Elaine Chiu commented further on AAVTF’s attendance at the sentencing and the press conference, stating, “It was a very valuable day with efforts that contribute to the multi-faceted work of our Task Force.”

Watch this News 12 report about the sentencing, in which Johan Tatoy, as the survivor’s attorney, spoke at the press conference and AAVTF Task Force Chair Elaine Chiu was interviewed.

To learn more about the AAVTF and support its efforts, please click here.

Join the AAVTF at the next court watching on January 10, for the sentencing for Elisaul Perez, who pled guility to manslaughter in the death of GuiYing Ma. More details here:
https://www.aabany.org/events/event_details.asp?legacy=1&id=1701949