On April 20, Immigration Law Committee Co-Chairs Annie Wang, Poonam Gupta, and Zhixian (Jessie) Liu held a webinar titled “Immigration Changes Under the Biden Administration: A Look Back and Overview.” The co-chairs provided updates to the immigration policies under the Biden administration and compared it to the plans President Biden had outlined when he first took office.

In the webinar, the Immigration Law Committee provided updates to the status of the U.S. Citizenship Act of 2021 and the American Dream and Promise Act of 2021 in the U.S. House of Representatives and the U.S. Senate, and discussed how passage of the bills could affect the pathway to citizenship. The co-chairs also covered employment-based immigration changes including the withdrawal of the H-4 EAD (Employment Authorization Document) rule, the repeal of the BAHA (Buy American and Hire American) Executive Order, and the changes to the H-1B Visa Program for fiscal year 2022. Co-Chair Annie Wang discussed the national dialogue surrounding asylum and refugee resettlement, and gave an update on the status of current DACA litigation. The co-chairs concluded the webinar by providing a quick overview of the rescission of the Public Charge Rule.

Nine federal agencies will share information concerning their missions and available programs and resources. This information-packed event offers a roadmap to access federal services, to build stronger relationships, and to explore ways that we can work together to better serve Black, Latino, and other communities of color.

Email questions or suggestions to: WorkingTogether@ftc.gov.

The year 2014 marks the 50th anniversary of Title VII of the Civil Rights Act of 1964, landmark legislation prohibiting employment discrimination based on race, color, religion, sex, and national origin. By its enactment, notions of equality were more deeply embedded in United States public law.

The Law Schools of St. John’s University and New York University are very proud to present the collaborative effort assessing the past, present and future of Title VII.

This two-day symposium will include the following topics:

Registration for Continuing Legal Education (CLE)
The two-day Symposium qualifies for 9 non-transitional practice area CLE credit hours; 4 credits on Friday, 5 credits on Saturday. The CLE fee for each day is $150 or $225 for both days.

For credit card payment, e-mail the completed form to mckeevec@stjohns.edu or fax it to 718-990-5998. To pay by mail, send checks payable to St. John’s School of Law with the completed CLE form to:

UNITED STATES COURT OF APPEALS FOR THE SECOND CIRCUIT

The Criminal Justice Act/Pro Bono Committee is accepting applications for the Second Circuit’s Pro Bono Panel. The deadline is Friday, May 2, 2014.

Pro Bono Panel members will, at the Court’s invitation or on an appellant’s motion for appointment of counsel, represent pro se litigants in civil appeals that present issues of first impression, complex issues of law or fact, or raise potentially meritorious claims warranting further briefing and oral argument. Pro bono representation will be provided to litigants who would otherwise be unable to pay for counsel and are ineligible for the appointment of counsel pursuant to the Criminal Justice Act.

Cases in which pro bono counsel will be appointed cover a broad range of legal issues. A significant percentage of the cases are prisoner civil rights appeals; others may involve labor and employment, discrimination, social security, immigration and tax law.

Applicants must be admitted to and members in good standing of the Bar of the Second Circuit, or have an application pending before this Court, and have at least three years of appellate experience. Pro Bono Panel members will serve for a term not to exceed three years.

Pro Bono Panel Members who were appointed by the Court in 2011 for a three-year term must submit a new application if they wish to remain on the Panel. A completed application package contains a resume, a written application (available on the Court’s website at http://www.ca2.uscourts.gov) and three writing samples, preferably appellate briefs on which the applicant was the primary author. These materials must be submitted to Sally Pritchard, Director of Legal Affairs, United States Court of Appeals for the Second Circuit, 40 Foley Square, New York, NY 10007, by Friday, May 2, 2014.

Welcome to E-Verify Connection, an e-newsletter from U.S. Citizenship and Immigration Services (USCIS) for U.S. employers and workers. Each issue will bring you updates about E-Verify’s advances and activities, as well as other useful information related to employment eligibility verification.

If you wish to regularly receive this newsletter or other USCIS messages via our subscription management system, please visit Govdelivery.

A PDF version of E-Verify Connection is available online.

All U.S. employers are required to verify the identity and employment eligibility of everyone they hire. Please join the U.S. Department of Homeland Security, U.S. Citizenship and Immigration Services and the U.S. Department of Justice, Civil Rights Division, Office of Special Counsel for Immigration Related Unfair Employment Practices, for a webinar that can help you to be INFORMED and to KNOW YOUR RIGHTS regarding employment and hiring practices.

Click on the image below for a copy of the flyer. 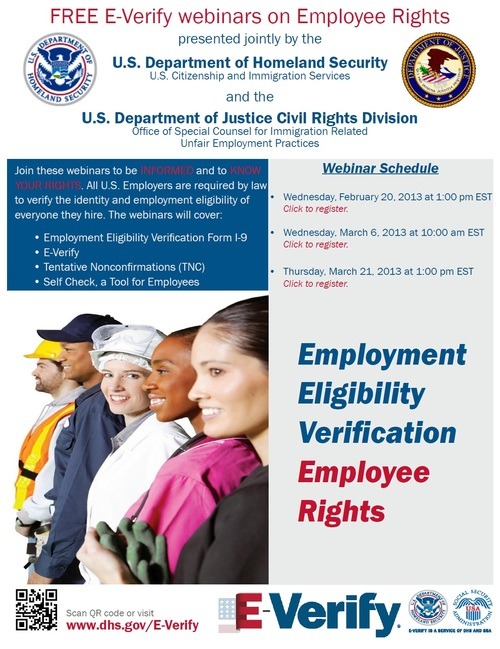 From our friends at KALAGNY:

Korean Community Services (“KCS”) has been coordinating with the New York Food Stamp Employment and Training (“FSET”) program, a state funded job training program. To increase connections with local employers (and ultimately for FSET participants), KCS and partner organizations, CMP (Chinatown Manpower Project) and Chhaya CDC, are holding a job fair on February 28, 2013 from 10 a.m. to 3 p.m. at United Health in Flushing. If you are an employer and are interested in attending the Job Fair, please email Yi Wang with KCS at wangyi.kcs@gmail.com.