The Criminal Justice Act/Pro Bono Committee is accepting applications for the Second Circuit’s Pro Bono Panel. The deadline is Friday, May 2, 2014.

Pro Bono Panel members will, at the Court’s invitation or on an appellant’s motion for appointment of counsel, represent pro se litigants in civil appeals that present issues of first impression, complex issues of law or fact, or raise potentially meritorious claims warranting further briefing and oral argument. Pro bono representation will be provided to litigants who would otherwise be unable to pay for counsel and are ineligible for the appointment of counsel pursuant to the Criminal Justice Act.

Cases in which pro bono counsel will be appointed cover a broad range of legal issues. A significant percentage of the cases are prisoner civil rights appeals; others may involve labor and employment, discrimination, social security, immigration and tax law.

Applicants must be admitted to and members in good standing of the Bar of the Second Circuit, or have an application pending before this Court, and have at least three years of appellate experience. Pro Bono Panel members will serve for a term not to exceed three years.

Pro Bono Panel Members who were appointed by the Court in 2011 for a three-year term must submit a new application if they wish to remain on the Panel. A completed application package contains a resume, a written application (available on the Court’s website at http://www.ca2.uscourts.gov) and three writing samples, preferably appellate briefs on which the applicant was the primary author. These materials must be submitted to Sally Pritchard, Director of Legal Affairs, United States Court of Appeals for the Second Circuit, 40 Foley Square, New York, NY 10007, by Friday, May 2, 2014. 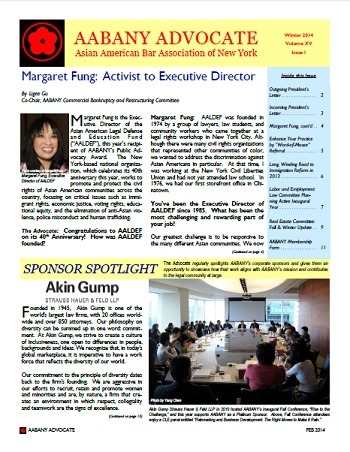 Washington, D.C. – The HNBA announced today that it has pulled its 40th Annual Convention previously scheduled for Phoenix, Arizona in September 2015.

On Monday, February 24th, the HNBA denounced the Arizona legislature’s passage of SB 1062. The HNBA also called for Governor Jan Brewer to veto the legislation and still hopes that she will do so. As set forth in its February 24th press release, SB 1062 discriminates against members of Arizona’s lesbian, gay, bisexual and transgender (LGBT) community.

The proposed legislation also impacts other citizens that are either traveling through Arizona or that are doing business or have business interests in the state. Accordingly, the HNBA’s Board of Governors voted unanimously to immediately pull the Annual Convention.

“The HNBA views this as a civil rights issue. As a national association of lawyers committed to promoting the ideals of equal protection, equal opportunity, tolerance, and inclusiveness, it is imperative that we speak up and take immediate action in the presence of injustice,” stated HNBA National President Miguel Alexander Pozo. As the late Rev. Dr. Martin Luther King Jr. said more than 50 years ago, writing from a Birmingham, AL jail cell, “injustice anywhere is a threat to justice everywhere.“

As lawyers, we have sworn to uphold the United States Constitution as well as the laws of our respective states. “In our view, SB 1062 violates the Equal Protection and the Commerce Clauses of the U.S. Constitution, and offends the anti-discrimination protections found in Title II of the Civil Rights Act of 1964,” said Mr. Pozo.

While the HNBA will remain steadfast, and stand in solidarity with our Affiliate Los Abogados and our HNBA members in Arizona, by taking this action we are sending a clear message to Arizona lawmakers. “Laws that return us to a darker time in the nation’s history simply cannot be tolerated. SB 1062 and SB 1070 are two such laws,” said Mr. Pozo.

About the Hispanic National Bar Association

The Hispanic National Bar Association (HNBA) is an incorporated, not-for-profit, national membership association that represents the interests of Hispanic attorneys, judges, law professors, legal assistants, law students, and legal professionals in the United States and its territories. Since 1972, the HNBA has acted as a force for positive change within the legal profession by creating opportunities for Hispanic lawyers and by helping generations of lawyers to succeed. The HNBA has also effectively advocated on issues of importance to the national Hispanic community. While we are proud of our accomplishments, we are mindful that our mission is as vital today as it was four decades ago, especially as the U.S. Hispanic population continues to grow.