The Asian American / Asian Research Institute invites you to an Evening Lecture Series talk, The Power of Listening: Hearing Voiceless Voices, by Rev. Dr. T. Kenjitsu Nakagaki, on Friday, March 14, 2014, from 6pm to 8pm, at 25 West 43rd Street, 10th Floor, Room 1000, between 5th & 6th Avenues, Manhattan. This talk is free and open to the general public.

Rev. Dr. T. Kenjitsu Nakagaki believes that Asian values such as “listening” are as valuable as the western values of “talking."  "Express yourself” seems to be the way of Western society, but this tends to create a more selfish society with little respect for others, and inattention towards people who don’t express themselves strongly. Rev. Nakagaki will discuss the need to develop more mutual-understanding and mutual-respect among different cultures, religions and ethnicity, through listening and learning from others. Listening is the way to respect and learn from others. This nurtures kindness and compassion towards others who are also members of society.

Rev. Dr. T. Kenjitsu Nakagaki, D. Min. is a Buddhist priest, ordained in the 750-year-old Jodoshinshu tradition of Japanese Buddhism. He is President of the Buddhist Council of New York, a Vice President of The Interfaith Center of New York, Clergy-on-Call for Columbia University, Community Clergy Liason for the NYC Police Dept., and Religious Advisor to the Japanese-American Lions Club.

To RSVP for this talk, please visit www.aaari.info/14-03-14Nakagaki.htm. Please be prepared to present ID to the security desk upon entering the building. If you are unable to attend, live webcast of the talk is available on the AAARI website starting at 6:15PM EST, with post-live video and audio podcast the following week.

For details on all of AAARI’s upcoming events, please visit www.aaari.info.

Congratulations to Women’s Committee Co-Chair Sapna Palla on her joining Wiggin and Dana as Partner in the Intellectual Practice Group in the firm’s New York Office. For more details, follow the link in the title to read the press release. 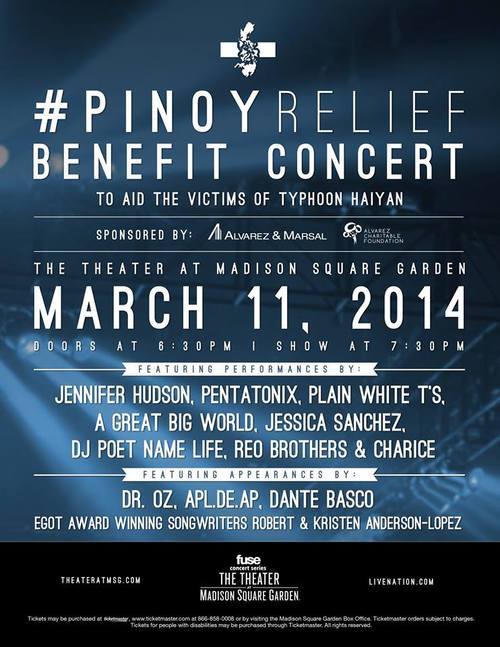 The Pinoy Relief Fund, Live Nation and Alvarez & Marsal have announced that they will host a Pinoy Relief Benefit Concert on March 11, 2014, at the Theater at Madison Square Garden.  Doors open at 6:30 P.M., and the concert starts at 7:30 P.M.  Tickets to the event are on sale now through Ticketmaster at http://www.ticketmaster.com/Pinoy-Relief-Benefit-Concert-tickets/artist/1960921.

FALANY members are trying to order tickets to sit together.  Please let Vincent Roldan (vincent.roldan@gmail.com) or Noel Vales (noelvales@yahoo.com) know if you are interested in joining.  Also, just prior to the event, FALANY will be meeting for a casual happy hour with Rudy Figueroa, General Counsel & Corporate Secretary of Mitsui Rail Capital, LLC and President of the National Filipino American Lawyers Association (NFALA), who will be visiting from Chicago.  The location and time is TBD so please look out for further updates on this.

Bill Simonitsch’s Op-Ed, “Guise of Religion to Promote Discrimination,” is featured in The Hill. Bill does a great job in using his personal story and his role at NAPABA to address the recent discriminatory Arizona legislation.

Follow the link in the title to read the full text.

The NAPABA Law Foundation (NLF) is accepting applications for the McGuireWoods/NLF Internship Program. The Program will support students interested in the legal profession and will help students develop a commitment to advocacy on behalf of the APA community. The Program seeks to achieve these goals by providing undergraduate and law school students with meaningful internship experiences at the Washington DC offices of NAPABA and NLF.

Each law clerk and undergraduate intern shall be assigned projects that will further the missions of NAPABA and NLF, including:

Please note the deadline to apply has been extended to March 21, 2014. Click here for more information.

NAPABA Celebrates Confirmation of Vince Chhabria
to the U.S. District Court for the Northern District of California

WASHINGTON — On March 5, 2014, the Senate confirmed Vince Chhabria by a 58-41 vote to a seat on the U.S. District Court for the Northern District of California. He is the first person of South Asian descent to serve as an Article III judge in California’s history, and only the third South Asian American federal district court judge nationwide.

“NAPABA congratulates Vince Chhabria on his historic confirmation and is proud to have supported him in the nomination and confirmation process,” said William J. Simonitsch, president of the National Asian Pacific American Bar Association (NAPABA). “We applaud President Obama, Senator Boxer, and Senator Feinstein for their continued commitment to diversity on the federal judiciary, and their support of this nomination.”

Since 2005, Judge Chhabria has served as a deputy city attorney in the San Francisco City Attorney’s Office, where he is the co-chief of appellate litigation. Prior to public service, Judge Chhabria spent several years working in the private sector in San Francisco. After law school, he clerked at all three levels of the federal courts, including clerkships with Judge Charles R. Breyer on the U.S. District Court for the Northern District of California, Judge James R. Browning on the U.S. Court of Appeals for the Ninth Circuit, and for Justice Stephen Breyer on the U.S. Supreme Court. Judge Chhabria has distinguished himself during his career, receiving honors from the California Daily Journal, the International Municipal Lawyers Association, and NAPABA. He is a longstanding member of SABA-NC, an affiliate of NAPABA, which has strongly supported Chhabria’s nomination.

The National Asian Pacific American Bar Association (NAPABA) is the national association of Asian Pacific American attorneys, judges, law professors, and law students. NAPABA represents the interests of over 40,000 attorneys and 67 national, state, and local Asian Pacific American bar associations. Its members include solo practitioners, large firm lawyers, corporate counsel, legal service and non-profit attorneys, and lawyers serving at all levels of government. NAPABA continues to be a leader in addressing civil rights issues confronting Asian Pacific American communities. Through its national network of committees and affiliates, NAPABA provides a strong voice for increased diversity of the federal and state judiciaries, advocates for equal opportunity in the workplace, works to eliminate hate crimes and anti-immigrant sentiment, and promotes the professional development of people of color in the legal profession.

Are you a high school or college student age 15-21? Do you want to:

Please apply by March 12.  Download application here and send to cpanyc@cpanyc.org
OR fill in application on-line